Edge of the Rigging Knife

To be on the knife’s edge is to be poised on the precipice of something great and terrible… the slightest trenor, a small mistake, or even a case of bad luck could decide whether one lives, or dies. 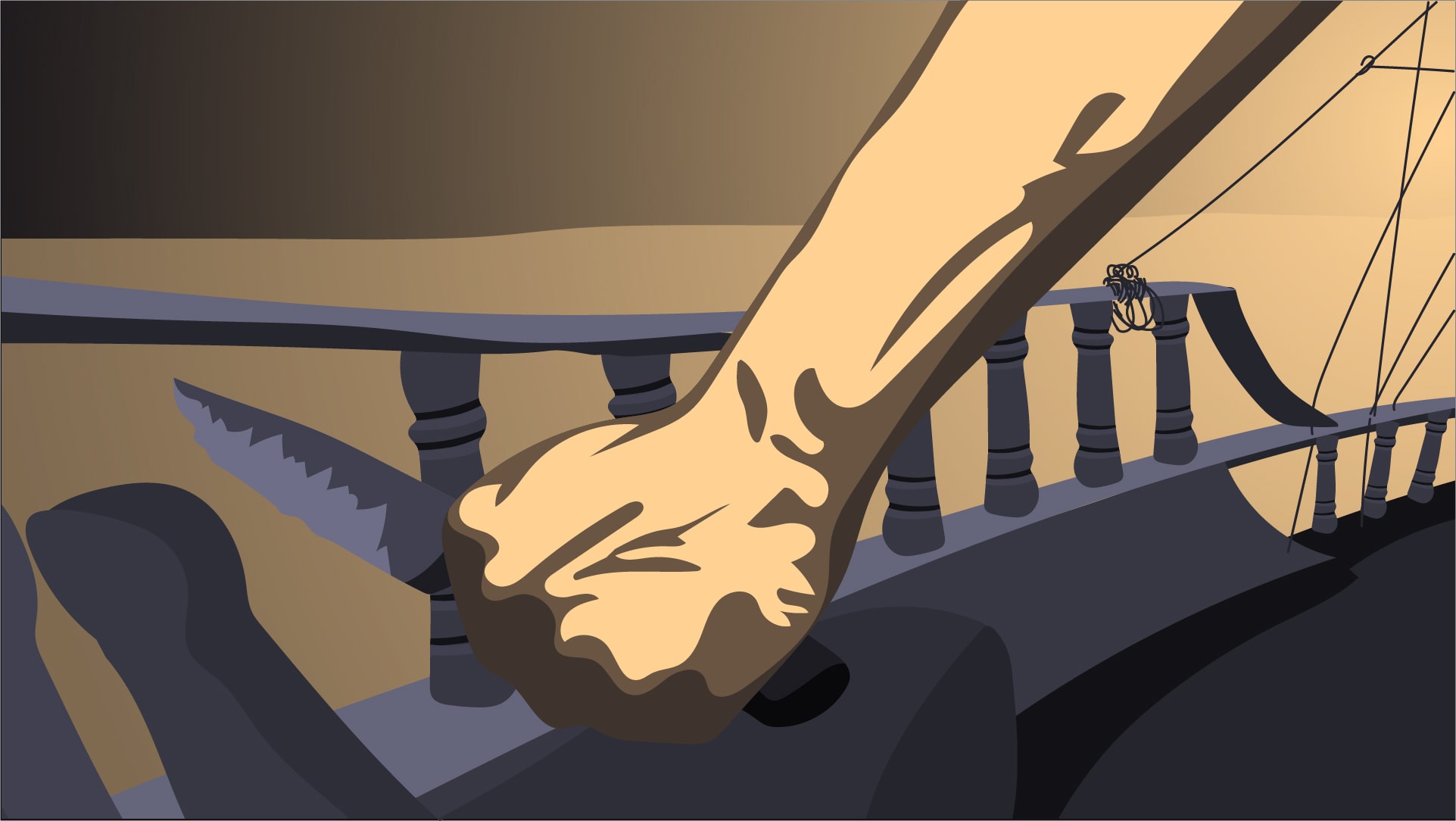 To be on the knife’s edge is to be poised on the precipice of something great and terrible… the slightest trenor, a small mistake, or even a case of bad luck could decide whether one lives, or dies. It is this feeling, a tension that connects my life to those of my crew, that sweeps over the deck and shakes them to their boots. The sticky sensation of fear. Even as they scurry over every inch of this vessel, ensuring every rope is fastened and every instrument is finely tuned, it feels as though we are trudging through a swamp with mudwater and vines coiled about our feet.

I did not care for the exact reason we were being mobilized. “Securing territory,” “protecting foreign interests,” “policing main thoroughfares,” in the end the simple act of moving from Calastore to the span of water between the Daggerlands and Vrovona meant WAR. Everyone in the Admiralty knew it. There was no hiding the truth of the matter, as it would have come upon us eventually. Still, the fact that it was to be my command that would dictate how this bloody conflict would start did not sit well with me. Would the history books remember me as a proud Itheri Admiral, going down with his ship and sparking the end times for our nation? Or would they mark me as a coward, whose actions saved his men from death a few years before they died anyway and still caused Ithero to lose yet another war? The future is too bleak to look out at from the stern of this ship and is just as dark as it is coming from the tip of my pen. But the salt of an admiral is their ability to navigate any doom-spoken sea or gods-damned storm. A plan hatched in my mind, one that might get us out of this predicament. Yet in the back of my head, the reality of the situation gnawed at my mind. We were severely unprepared for a slugfest of guns and cannon on open water.

Thirteen Itheri destroyers, six Vrovonic “Sunbreakers,” against a fleet of Aloreh’s largest war vessels and Dagger Ironclads? We were at their mercy. We may have had the strength of Vrovona, but even the sun was on the Union’s side as we sailed ever closer to the reddening horizon.

No one back home really thought we were going to war. My brother even wished me luck on my “training exercise,” not a sign of worry on his soot-covered face. How wrong were they all…the politicians were dead set on retribution, even at the cost of this entire fleet. As we approached the site of first contact, where our own Dagger merchant vessels were sunk, we could already see the amassing Coalition forces lining the horizon. The sun was at our backs…it was as if the heavens themselves were saying we were surrounded. To run was to meet the gods and test our fates, to face our enemy was to meet the bleak odds all the same. The specter of death lay upon us, freezing our movements, pinching at the joints. I looked to my peers in hopes to find comfort in our shared demise. Instead, I only found despair in their eyes and selfish condemnation. “It won’t be me that sets us down the path,” they seemed to communicate.

It was midday by the time our ironclad met face to face with the Itheri destroyer. Armaments were passed around. Crew’s faces sank deeper. Port to port. All hands on, it was to be a very tense “parlay.” Anchor detail. Cabin boys running aft; an act I found paralleled on the destroyer, whose own armor reflected the fury of the sun above us. The captain gave the order to set out the plank, while every living soul on both sides of the field had their breaths caught up in their throats.

I was in awe of the size. The ironclad, in its might, seemed to cut through the fleet of ships so arrogantly. Like a predator parting the grass before sinking her teeth deep into us - her prey. But as she approached, I couldn’t help but notice that men on either side wore the same grim faces. Perhaps we’d meet each other face to face in the afterlife as well…depending on the orders given in the next few minutes.

The tension in that air would have blunted the sharpest Vrovonic blade that tried to cut it. The moment the Dagger captain and his boarding crew stepped aboard, I could sense the energy shift. All it would take to spark and electrify this conflict was a small mistake or plain bad luck - a fool taking a potshot, or a boy seeking fleeting glory. The admiral rose up from below deck, and the two giants shook hands. A sign of acknowledgement; of mutual respect in the face of mutual destruction. The two stepped closer, meeting in the middle of our vessel. They drew close, ear to ear. Whispers. Looks of consideration. Were they bartering?

He spoke with a booming voice, shaking us alert all over again, “One for one, eye for an eye. We handle this tactfully - no more than one needs to die today.”

The Itheri admiral continued, “Draw a circle, and with honor, First Mates step in. Upon the Quartermaster’s flag, knives out till first blood. And for the sake of all our lives, keep the peace and hold your tongues. Calastore or Monas, better to rest at home than beneath the tide.”

No more words were spoken. I stepped up from my position near the helm, made my way down the stairs and approached the plank. Today, gods willing, at least the captain and crew could sail free.

A beast of a man, but I had slain bigger beasts before. Our eyes met. Focusing on weaknesses, analyzing our opponent for the crucial minute before the flag drops -

Draw! A thrust to my liver. Bastard would bleed me. Pivot and counter. A clash, blades biting. His knifework is sloppier than mine. I can lead him then trap him down. He backs off, and I jump forward! Take initiative!

Stick em’ in the gasbag…but the air is spent from my chest as his kick lands. I roll and tackle his legs and hear a knife clatter to the deck. Praying he doesn’t have another as I lock him.

He yelps as I connect.

He’s quick! He grapples me but I expect it. My element. I grab his left and toss him over me while jabbing my knee into his stomach. The momentum tosses him over and gives me control. Knife - !

He can’t get a cut, the hilt connects to my cheek. I land blows on his head. Butterflies should be rattling round his skull.

He drives the knife again, a death grip on the hilt. I slam him into the deck missing death by inches. Splinters. Blood. The knife drops. He’s surely shaken now. I give him two more socks and another knee for good measure. I find the blade.

I hold it to his throat, ready to stain the deck with his damned blood. But, before I can land my killing blow, the order is given to stop. I look him in the eyes, and see the red stain on his throat begin to coagulate little by little.

We shake hands. Clammy. I know how it would have gone. A second too late, and I’d have been covered in a shroud and tossed overboard.

As quick as it had started, the deed is done and an uneasy truce as they depart. The Dagger boarding party is over - no takeaways for our dinner guests. The plank is withdrawn and orders given to anchor duty…though we’ve lost the fight and honor dictates we depart on good terms, not a man on deck is without flint in his hands. I feel no shame at this outcome. The sting on my neck reminds me of the price of glory.

I pass the captain's quarters on the way to the ship doctor, watch him finish scribbling some high admiral communications. He catches my eye from the door, “skirmish. No casualties. No shots have been fired.” He offers me a slight grin, but slowly it sinks, threatening to sink even deeper to despair as reality settles on the old man. It is natural to cover up bad news, and the image of a grand old ship being hauled off for destruction another day depresses me. I close the door, turning down the hall to watch the sky darken through a porthole.

Our long watch begins over a war that’ll start with smoke and powder, whose only saving grace is a lie found in blooded blades and desperate bargains. A fitting end to an empire grown fat from its strength.